The Domaine Gagnerot was established in 1802. After the second world war, Roger Capitain maintained the estate and passed the stewardship to his two sons, Patrice and Michel in the 1980’s. Now in the hands of the ninth generation, Pierre-Francois and Delphine carry the family tradition. Over the last two hundred plus years, the family has meticulously acquired parcels in the Cotes de Beaune and Cotes de Nuits and the resulting Pinot Noir and Chardonnay are beautiful expressions of elegance and purity. The estate is certified Biodynamic. Voted “Winemakers of the Year” by the Guide Hachette for 2021.

Video from Delphine and Pierre-Francois

“Moderately deep golden color. Traces of the exotic and of petrol serves as a ripe but fresh introduction to the solidly concentrated and rich middle weight flavors that exude a fine bead of minerality onto the clean, crisp and intense finale where a hint of butter arises. Note while this could easily be enjoyed now, I would actually suggest holding it for 2 to 3 years as I suspect this will become both more texturally more interesting as well as possibly adding more depth.” 89/2018+ Allen Meadows, Burghound. Issue 64, Fall 2016

“Vibrant, spiritual, and complex. Waves of candied lemons, with laser focus and purity,  pears, and minerals”

Biodynamic Certified, estate grown grapes.  Hand harvested, fermentation (full-malo) from 12 to 15 days at 20°. Cold maturation for 10-20 days, tartic participate encouraged.  Nine months in barrels, only 10% of which are new.

.9 acres, at the northeast edge of the Corton hillside. Eastern side of Corton-Renardes Grand Cruon the Ladoix-Serrigny side of Corton.

Bouquet of cranberry, raspberry and a bit of earth. Surprisingly quite structured and a very serious wine. Concentrated black cherries, cranberries, forest floor and a little spice come through on the palate. Well balanced with good transparency and acidity 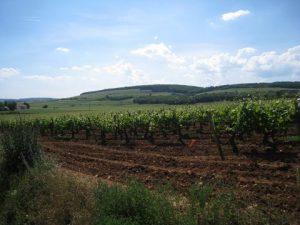 Parcel at the northeastern base of the Corton hillside

(2015 vintage) There is a background suggestion of menthol to the expressive nose that mixes both upper and lower register aromas of poached plum, red and dark raspberry and soft earth notes that manage to retain good freshness despite the elevated ripeness levels intrinsic to the 2015 vintage. The plush, round and seductively textured middle weight flavors possess good power and focus while offering good length on the mildly rustic finale. While this could easily be enjoyed now, there is enough tannin waiting to be resolved to argue for a few years of patience. 89/2022+

(a monopole of the domaine). A notably ripe nose features notes of poached plum and dark cherry along with whiffs of spice and warm earth. There is very good richness and reasonably good concentration to the moderately robust medium-bodied flavors that aren’t especially complex at present but the density is sufficiently good that more should develop over the course of a few years of bottle aging. 90/2022+

(2015 vintage) There is a background suggestion of menthol to the expressive nose that mixes both upper and lower register aromas of poached plum, red and dark raspberry and soft earth notes that manage to retain good freshness despite the elevated ripeness levels intrinsic to the 2015 vintage. The plush, round and seductively textured middle weight flavors possess good power and focus while offering good length on the mildly rustic finale. While this could easily be enjoyed now, there is enough tannin waiting to be resolved to argue for a few years of patience. 89/2022+

Parcel on map of Pernand-Vergelesses

“Deep red, light purple in color.  Floral and giving of slight underbrush.  Lithe, yet forceful of expressive forward fruit which builds upon a velvety and coolness. The flavor holds very well on the palate, with mineral driven finish.” 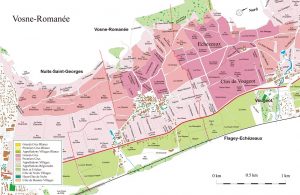 2018 Aloxe-Corton “La Coutière”: Smoky reduction and moderate wood overshadow what are clearly ripe aromas. The round, rich and nicely fresh and vibrant medium weight flavors possess an agreeable texture if limited refinement on the slightly warm finale. This could easily be drunk now or held for 1 to 2 years for more depth to develop. 88/2023+

1er Cru la Coutiere, base of the Corton hill 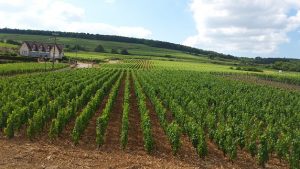 2018 Saint-Romain “Au Bas de Poillange”: A fresh is restrained nose speaks of ripe green apple, quinine and discreet floral nuances. The delicious and vibrant lighter weight but by no means dilute flavors exude evident minerality on the lemony finish that offers just enough depth and persistence to be interesting on the dry but not really austere finale. I like the intensity and the refreshing character and this is really quite pretty. 88/2023+ 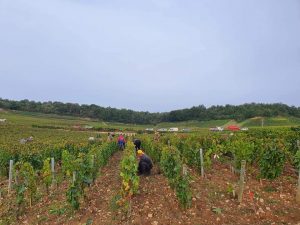 Map of parcels in Saint Romain

“Discreet but not invisible wood frames agreeably fresh and cool aromas of green apple, pear and wet stone scents. There is good vibrancy to the delicious, round and plump flavors that possess an attractive texture though limited depth on the lightly stony and sneaky long finish. This is of course young and will undoubtedly add depth with a few years of bottle age but it is relatively simple at present and my rating offers the benefit of the doubt.” 90/2019+ Allen Meadows, Burghound. Issue 64 Fall 2016

Parcel at “Pougets” on the Aloxe-Corton side of Corton

An attractively spicy nose features notes of poached plum, dark cherry and soft earthy wisps. The delicious big-bodied flavors possess good if not exceptional mid-palate concentration as well as admirable power and muscle on the impressively complex if rustic and again noticeably warm finish. The balance isn’t perfect but there is very good underlying material along with firm supporting tannins that should ensure a long life. In sum, this won’t win any awards for elegance but overall this is certainly a solid effort. 92/2027+.        Allen Meadows Burghound,  2nd Qtr 2019  Issue 74

“A classic Renardes nose speaks of spice, earth, cassis, plum and plenty of the sauvage that also extends to the rich, full-bodied and velvety flavors that possess excellent power and muscle that culminate in a focused, palate staining and impressive long finish.This serious effort should age extremely well and moreover, be well worth the investment of your patience”.

“Not surprisingly this required a good 30 minutes to really get rolling; moreover there is initially a touch of reduction present though it doesn’t last and eventually, if grudgingly, reveals a lovely nose of spice and various dark berry fruit aromas that include discreet plum hints along with just a trace of crushed green leaf. This leafy character can also be found on the medium weight flavors because even though there is reasonably good phenolic ripeness in the context of the vintage, there is a mild edginess due to the a touch of acid tang. Still, this is certainly pretty and even though the balance is not perfect, the complexity largely makes up for it.” 89/2019+ Allen Meadows, Burghound. Issue 64, Fall 2016

“This producer, based in Ladoix-Serrigny in the Côte de Beaune also has a small parcel in this Grand Cru in Vosne-Romanée. Like all this producer’s wines it was fermented in open tanks before barrel aging. That gives an extra concentration to the ripe fruits and firm tannins. It is an opulent wine, juicy with black fruits and acidity. With its structure, it will certainly age further, so drink from 2019.          94 Points. Wine Enthusiasts, Roger Voss. 12/16/2016

2015 Clos de Vougeot – Quartier de Marei Haut: There is just enough reduction present to shave the top notes from the very ripe black pinot fruit, dark cherry and soft earth-suffused aromas. There is good richness to the delicious, velvety and round medium-bodied flavors that conclude in a mildly rustic and noticeably warm finish. I like the complexity and there is
reasonably good verve as well but the warmth isn’t subtle though to be fair, neither is it enough to really significantly compromise the overall sense of balance. 91/2027+